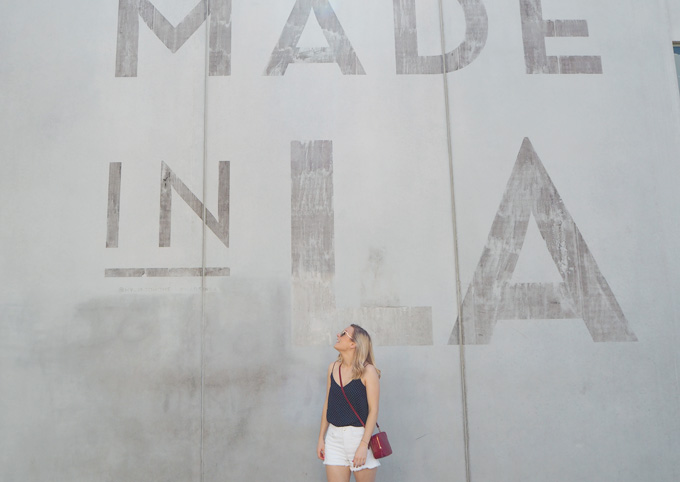 After a ten hour flight from Manchester, we landed in the City of Angels to kick off our California adventure and spend four days exploring LA.

We were greeted by blue skies and palm trees and I could already see myself falling in love with this vast city. Our hotel, Hotel Normandie was in the Korean area of LA, it was stylish, clean and perfectly located for us to walk to restaurants and bars. But honestly we didn’t need any other restaurants other than Cassell’s, the local burger bar on the ground floor of the hotel which sold the best burgers I’ve eaten in my life. Perfect for when we arrived back to the hotel, tired and sleepy after a day exploring and didn’t want to go far to eat. Beer Belly was another local spot we loved stopping by for a beer and some food which was only five minutes walk away from Normandie. 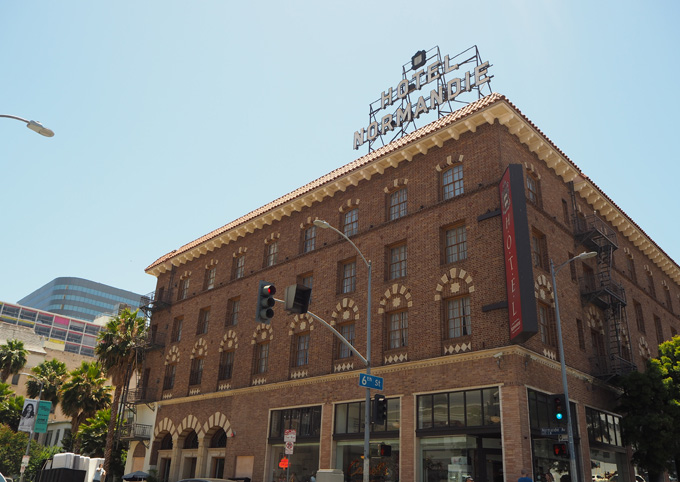 On the first full day in LA we set out to explore Melrose avenue, an area near Beverley Hills and Hollywood. This road is renowned for it’s colourful graffiti, fashionable boutiques and cool coffee shops. We started from Carrera Cafe, (8251) and walked down Melrose taking in all the wall art along the way, both the famous stripey Paul Smith wall and the ‘Made In LA’ mural were within walking distance from each other. From here we walked up towards Sunset Blvd and Hollywood Blvd to catch a glimpse of the famous Walk of Fame. To be honest we couldn’t miss it. Once we were on the street we followed the stars that lined the pavement and we spent the morning looking our favourite famous names to take a photo with. The vibe in this area was lively and friendly, so we stopped at a local American bar for a beer and enjoyed watching the electric mix of people walk by.

Runyon canyon, a favourite with the local runners and dog walkers, was a five minute stroll from the walk of fame area, so we grabbed some water and hiked up to the famous view point. The view from the top was well worth working up a sweat on the twenty minutes hike to the top, we also managed to catch our first glimpse of the Hollywood sign from here too. 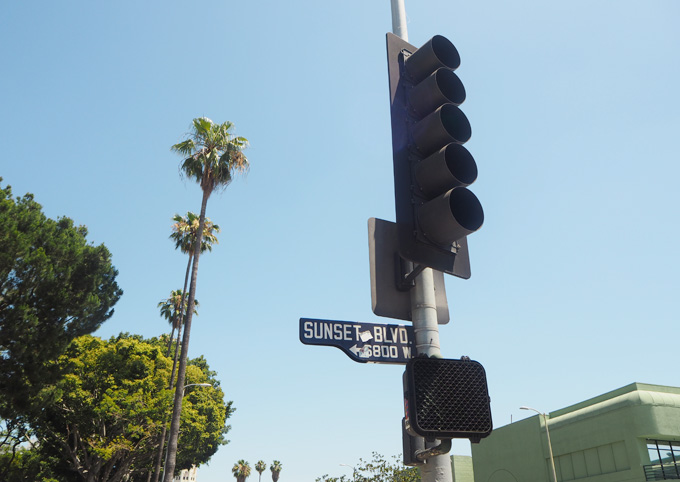 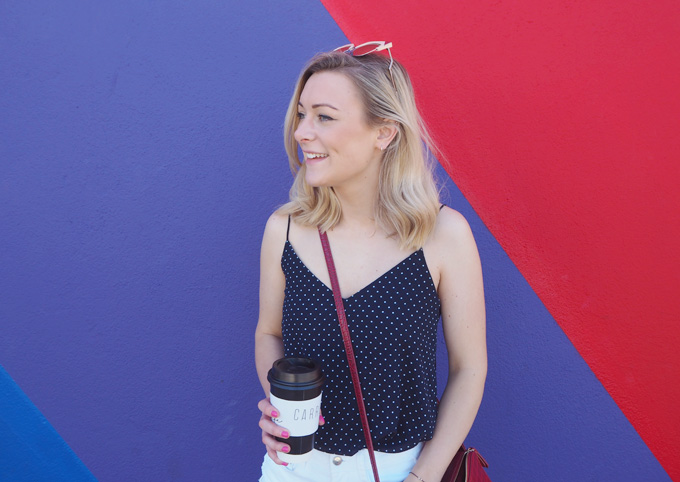 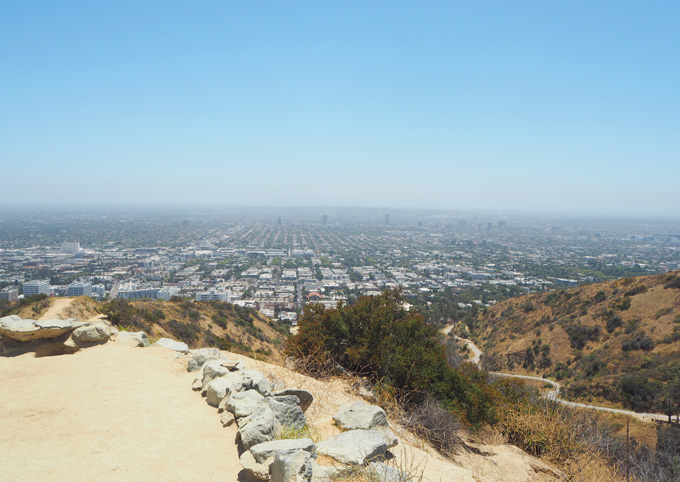 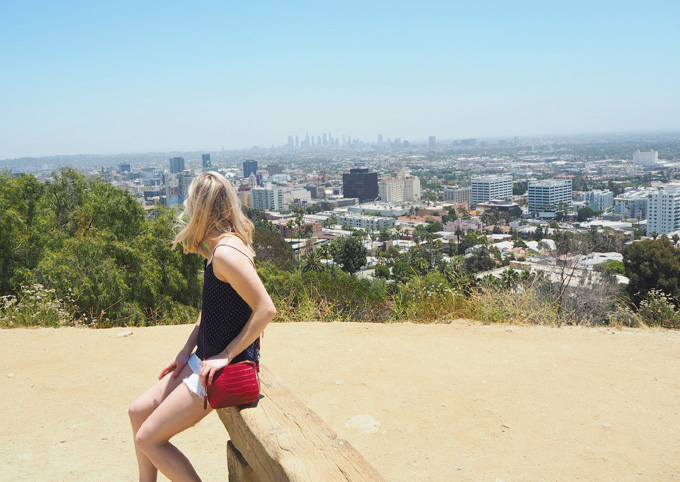 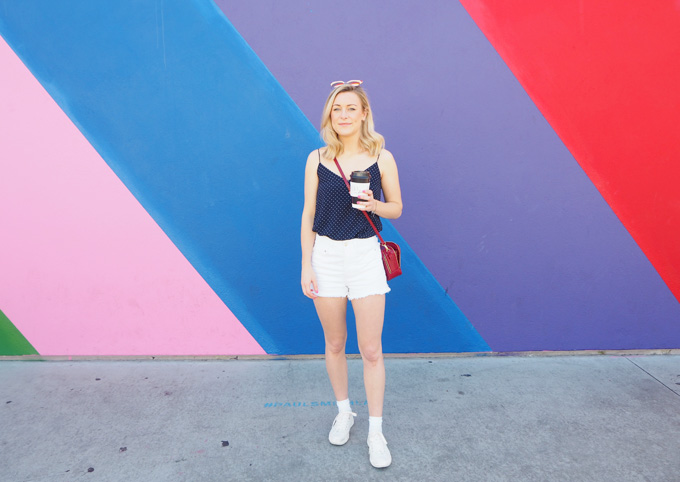 As LA is such a big, spaced out city we often used Uber to get around during our stay. We were considering hiring a car whilst we were there, as many people had recommended this, however feeling a bit nervous driving, we thought Uber would be the next best thing. It turned out to be perfect for us as journeys were cheap and flexible and we didn’t need to worry about parking or working out the road layouts. Uber and Lyft are really popular in California and there were always plenty of cars ready when we needed them, plus we didn’t need to worry about money until we were back in the UK.

Top tip: You will need WiFi to connect to the Uber app. We found local Starbucks lifesavers for popping into when we needed free wifi to call an Uber. 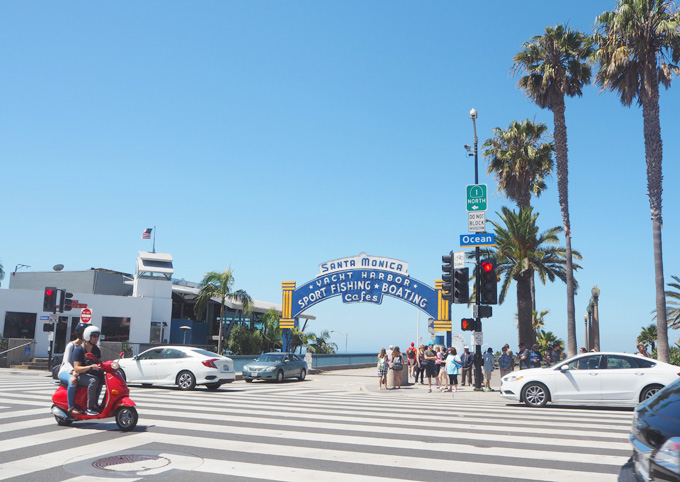 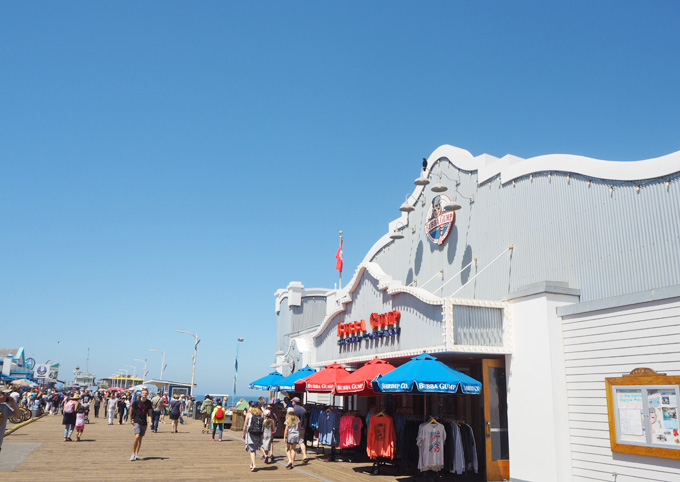 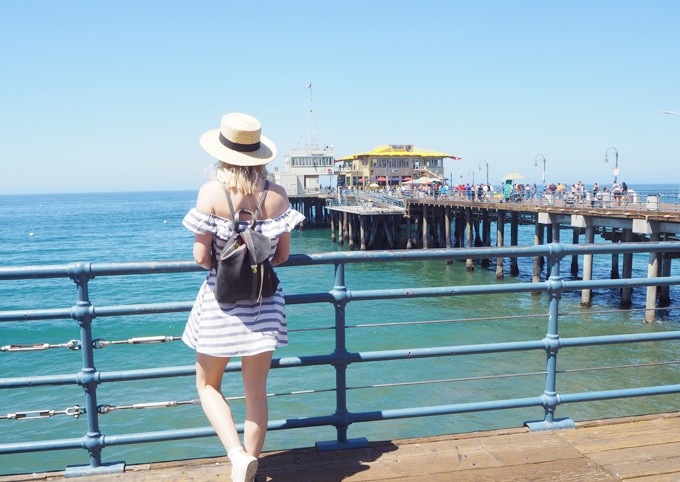 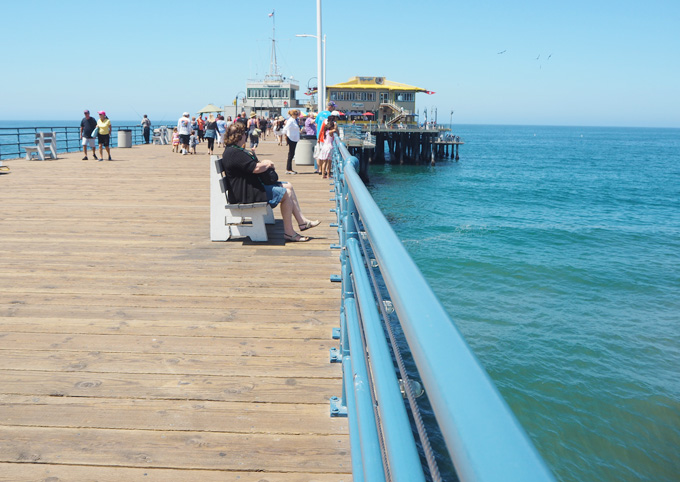 We spent our second day in LA at Santa Monica beach and pier, about half an hour drive from our hotel. This part of LA was one of my favourite spots, although a tourist attraction the atmosphere was fun and vibrant and there was plenty to do. Restaurants and gift shops lined the pier along with fairground rides inside Pacific Park. We took time out on the beach in the afternoon, and enjoyed dipping our toes in the clean, cool sea of Santa Monica Beach.

Venice beach was a short walk down the coast from Santa Monica, and we stopped at Larry’s just off the strip for some late lunch. We shared a pizza as the prices were a little steep around this area, but the atmosphere was friendly and relaxed which we loved. After detouring for some Venice Beach souvenirs at one of the many gift shops, we called an Uber and headed back to the hotel. 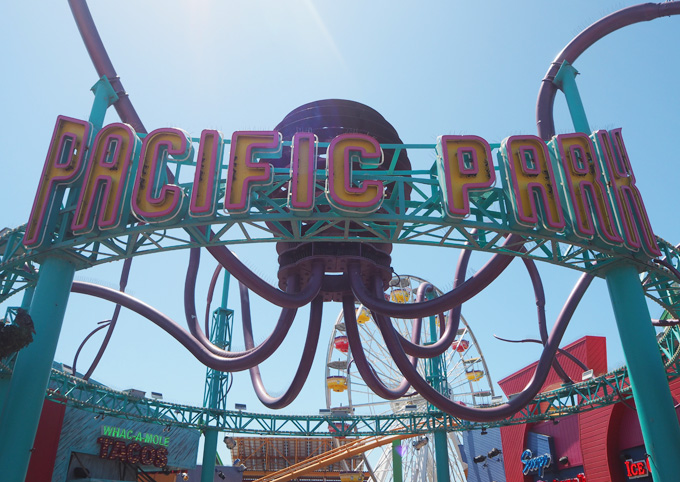 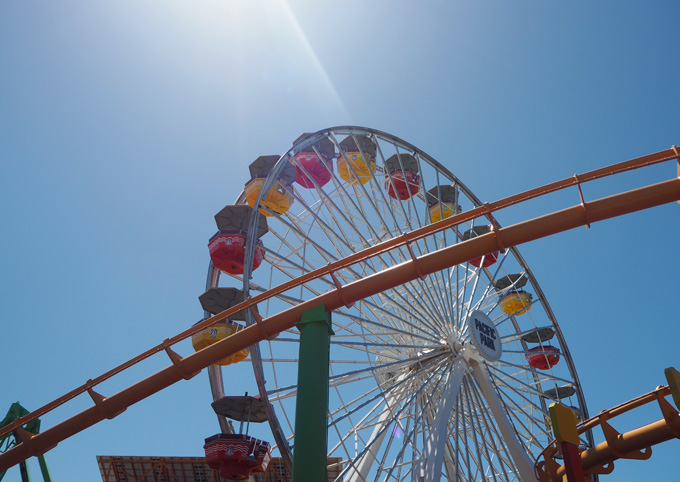 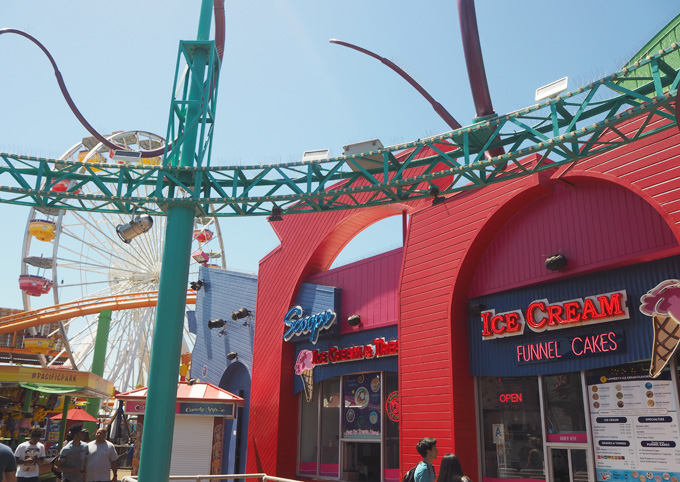 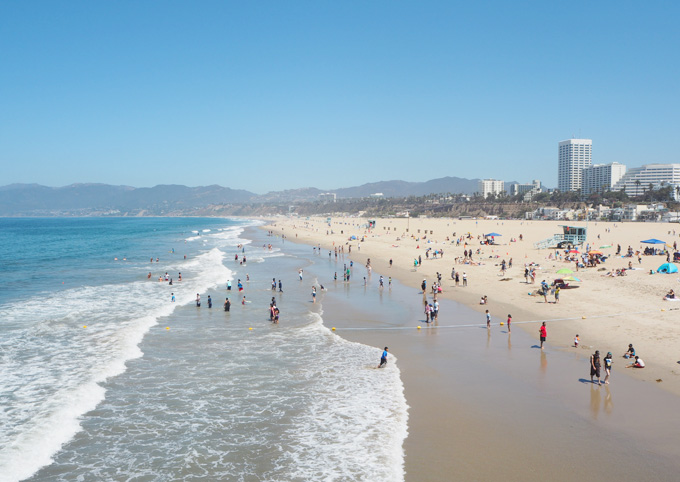 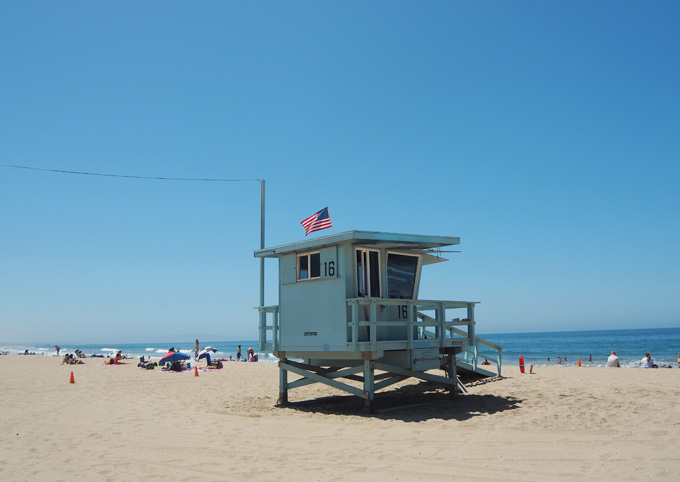 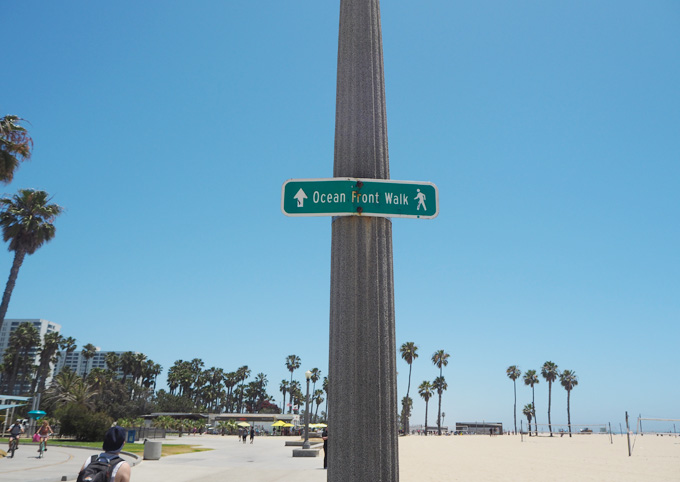 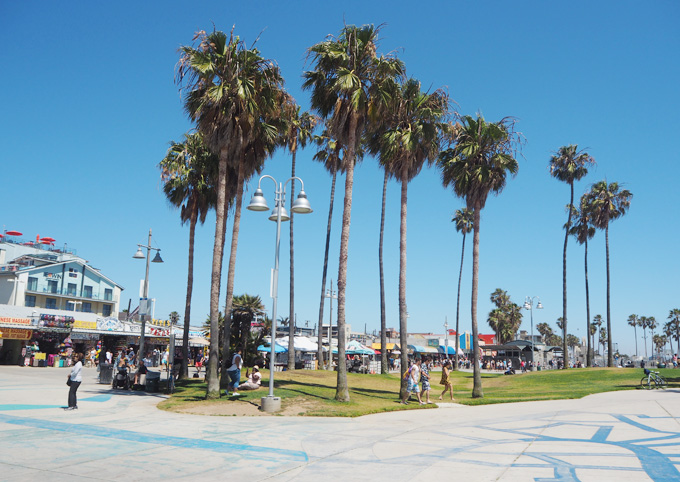 Downtown LA and The Griffith Observatory

From our hotel we could walk to Downtown LA easily in around forty five minutes, so we set off early on the last full day to explore what the area had to offer. Our first stop was the Grand Central Market for some food. This undercover market is famous for food from around the world from a variety of independent food sellers, from falafel to pizza there were so many tasty options we struggled to choose just one. After fueling up we called an Uber and headed about twenty minutes north to The Griffith Observatory. The observatory is on a hill that overlooks the whole of LA and has great views (closer than Runyon Canyon) of the Hollywood sign. The Observatory has a little museum inside which is all free and great for families but we headed straight outside to admire the breathtaking views over the city.

This was by far my favourite spot in LA and I would highly recommend going if you get a chance. From the Observatory you can walk to the Hollywood sign but we just stuck to wandering around the museum and grounds. 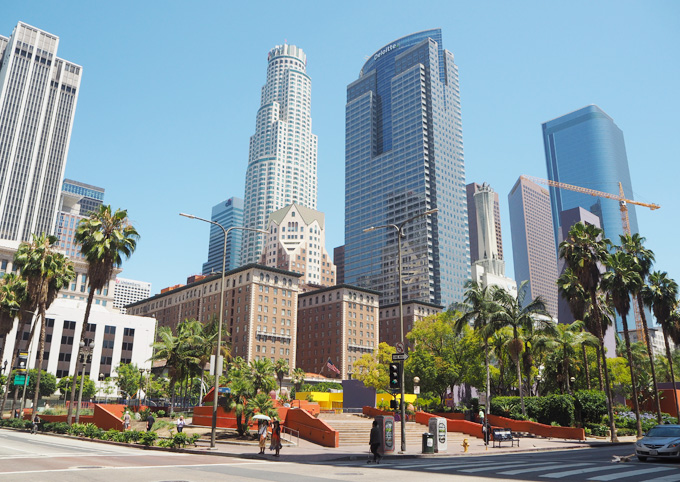 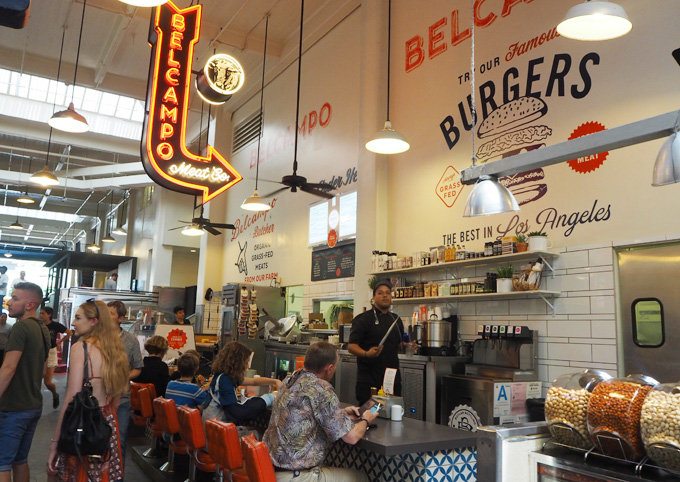 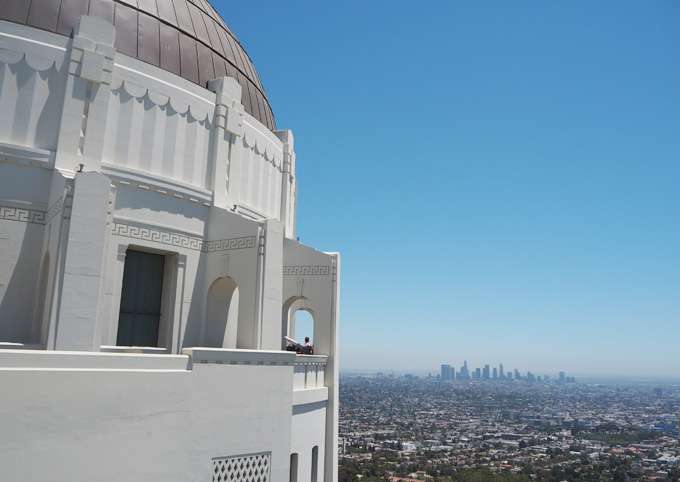 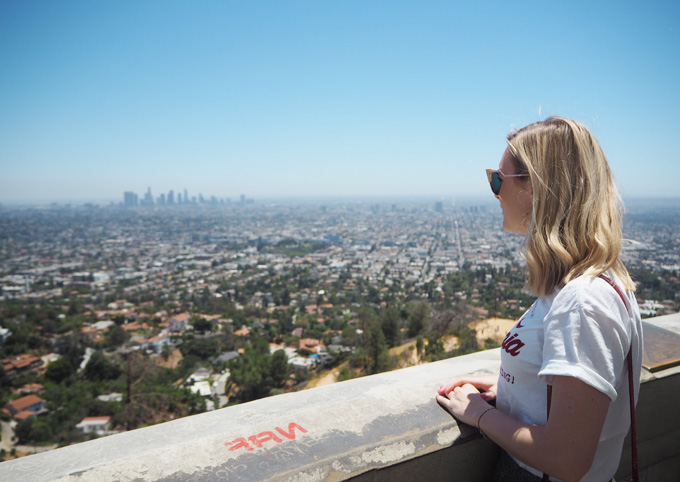 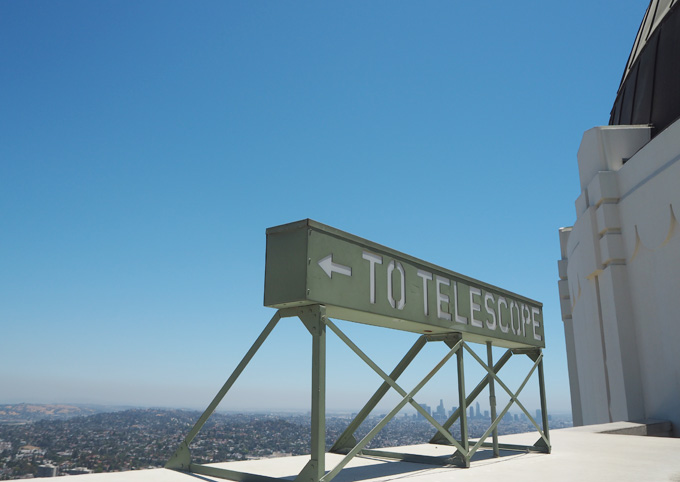 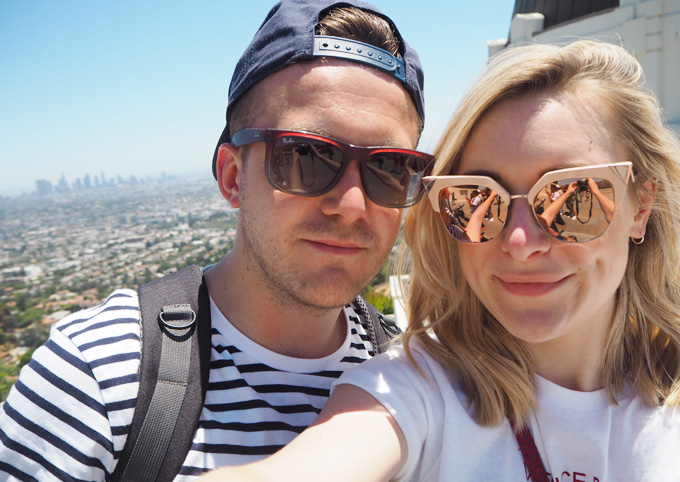 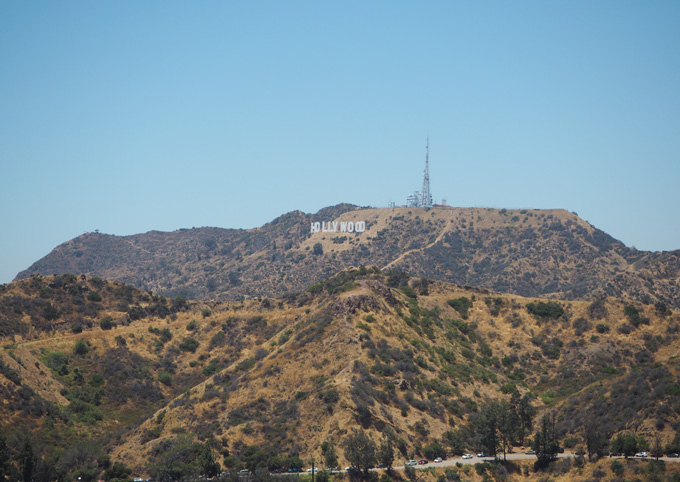 Overall I really enjoyed LA, I was a little skeptical after hearing other peoples views of the city but I love visiting new places that have plenty to see and do and LA certainly doesn’t disappoint. LA is really big and spread out which was the only downfall, we would have liked to have seen more but could only do a limited area in the time we had due to its size. I think I would book to spend a week here if I was to visit again, that way we could go further a field to Laguna Beach, Malibu and even Santa Barbara.

So, after four brilliant days in LA we flew on to San Francisco to continue our tour of California. Check out my next blog post to find out what we got up to in San Fran, here.

Have you ever been to LA?

I would love to hear your views and what you thought of this eclectic city.